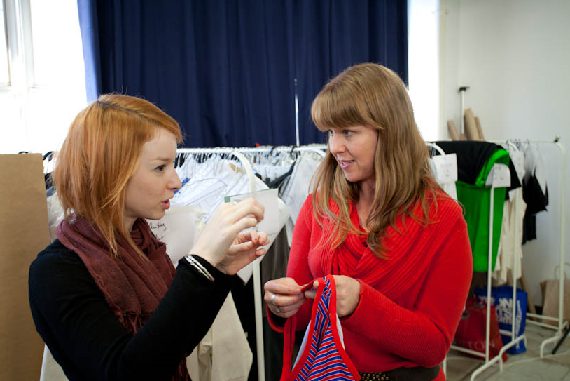 A few months ago you may have received a post from me about Pre-production samples. In the past few weeks it has come to light that this subject may need to be expanded upon.

A Pre-production sample is the last check before you commit to thousands of dollars’ worth of fabric and manufacturing.

This process is even more important if you are using external contractors for your development process.

Why? Well when you have a team working in house with you, a lot of possible mistakes are caught; not whilst in a formal meeting but while you are walking past someone’s desk, while you are talking in the lunch room, when someone sees the fabric arrive in the loading bay. By removing this close contact, your contractors are left to make decisions based on the information they have been given, which might not be the whole picture.

It is important to note that the fit of a garment is not always the same as the measurements of a pattern, especially where knit and woven fabrics are concerned. The process of development, of creating a mock up or sample from a pattern, is to see how that particular pattern works with that particular fabric. The pattern is then changed as a reflection of the sample made in that said fabric.

If the fabric has stretched and has resulted in a looser fitting style based on the pattern and you like it then we do not change the pattern. It might even be that you make the pattern smaller to compensate for the stretch of the fabric.

It is also important to remember that if you change the fabric in any way, then you need to trial the pattern again.

Take, for example, a recent situation where the fabric used for sampling was a loose knit with very little Lycra. During the sampling process, the fabric stretched. The customer then approved the sample. The pattern was graded, a marker made and was sent off to the manufacturer for production.

We later found out via an upset customer that the garments had not been made in the same fabric as the samples.

On further investigation, we discovered the first sample was bigger than the pattern and the production garments was smaller than the pattern. This resulted from the designer using a fabric with a lighter weight and a high Lycra content, causing the fabric to bounce back and shrink (as confirmed in pressing tests). The result was a two size difference from sample to production.

As we did not see the fabric used for production, we had no idea this was going to happen. It was only when we received the sample in the post to check what had happened we discovered this disaster.

The second disaster that was able to be rescued was a client who had originally come to us with a design that had a contrast panel. The pattern was made with these instructions.

The designer had then instructed their manufacturer to make in one Colour with no contrast. Without a preproduction sample signed off and the original instructions on the patterns, this information may not have been passed down the line; someone might be away the day the production was made or the production might be cut in house and made out of house.

As everyone else had seen that these particular panels were to be contrast, it came back to them with a contrast panel. The manufacturer has been able to change this but you could argue that they were following pattern instructions.

In this situation it does not hurt to colour in a picture and stick it onto the pattern or put a label over the top of the CONTRAST and write MAIN.

Never assume that your words are going to follow through the manufacturing process. Write as much information as you can to make sure you receive the production you want first off and keep everyone happy.

And ALWAYS make a pre-production sample in PRODUCTION FABRIC!